We review two artworks from Exhibition #01 with the motif of "sea-level rise" caused by the "climate crisis”, learn and discuss those issues. 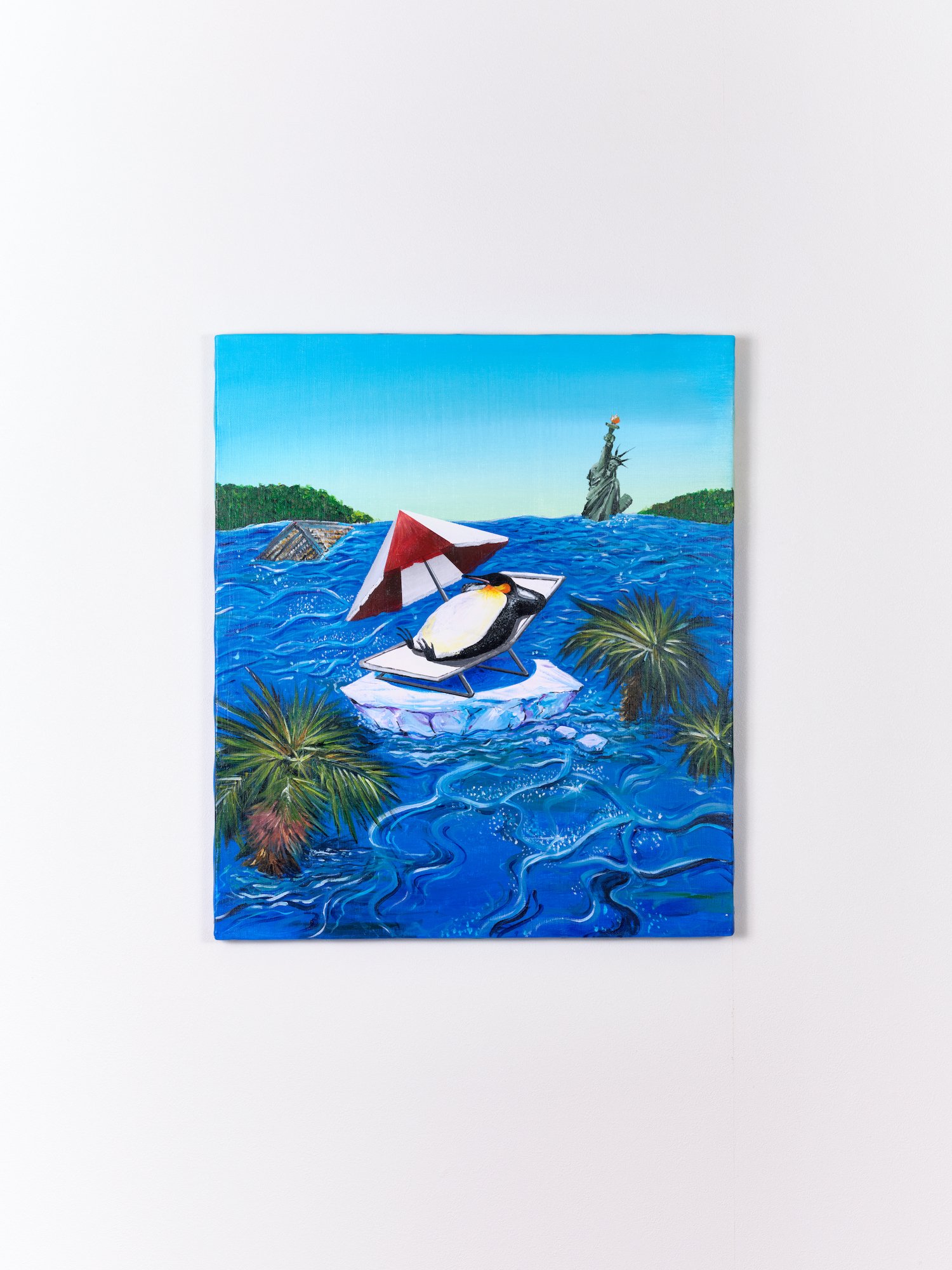 A penguin is relaxed under a beach parasol. It looks graceful at first sight, but when seeing the surroundings you will notice that it doesn’t really. The sea is so blue and beautiful, but the palm trees are blooming in the ocean, located on the same level of the penguin’s sight. Behind it, the Statue of Liberty is half under the sea and the other objects are partially visible like a reef. Perhaps all things have been swept by the sea and are drifting.

Although the wave must be normally calm under such a cloudless sky, the drifts that should not be there create some complex ridges, giving the whole scene a rough and powerful feeling that successfully emphasizes the penguin’s elegance in contrast.

The penguin is on a small drift ice and the surrounding environment doesn’t look generous enough to keep it cold. Can the penguin get somewhere safely? Does it still have a home left?

“Penguin on The Last Ice,” painted by Hirochika Machida, depicts the penguin relaxing on the last glacier on earth, but in our reality the glaciers are melting away now. In 2019, the ice sheet covering Greenland melted 532 billion tons (*1), the largest amount ever recorded, and in 2020 still continues melting at the fastest rate ever. Should all the ice sheet be melted, the sea level would rise about 7.4 meters, resulting in that the palm trees on the southern island would be swept away as shown in this painting.

Why are the glaciers melting? Needless to say, the global warming is responsible. As carbon dioxide (CO2), which is main part of a greenhouse gas, increases too much, a large amount of heat that is supposed to escape into space stays on the earth’s surface, causing the temperature to rise and the climate of the entire planet to change.

It was not until the industrial revolution in the 18th century that CO2 emissions began to increase dramatically. As a result of burning fossil fuels like coal and oil to access energy, CO2 in the atmosphere increased rapidly. In other words, human activities are the main factor of global warming.

The average global temperature has already risen by more than one degree Celsius from the pre-industrial level. As the ocean water temperature rises, the volume of the seawater expands and the glaciers and ice sheets melt. In fact, the sea level rose by 19 cm from 1901 to 2010, and if this trend continues, it is predicted to rise by 82 cm by the end of the 21st century (*2). In recent years, many studies hint a even more serious rise in sea level.

The sea level rise of this magnitude will not only inundate and submerge many wetlands and tidal flats, but if it rises by one meter, about 90% of Japan’s beaches will be lost with 26% of Osaka and Nagoya uninhabitable. In some places, such as the Republic of Maldives and the Republic of the Marshall Islands, the whole country will sink into the sea and disappear.