We review artworks from Exhibition #03 with the motif of “plastic ocean”, learn and discuss the issues of ocean pollution by plastic waste. 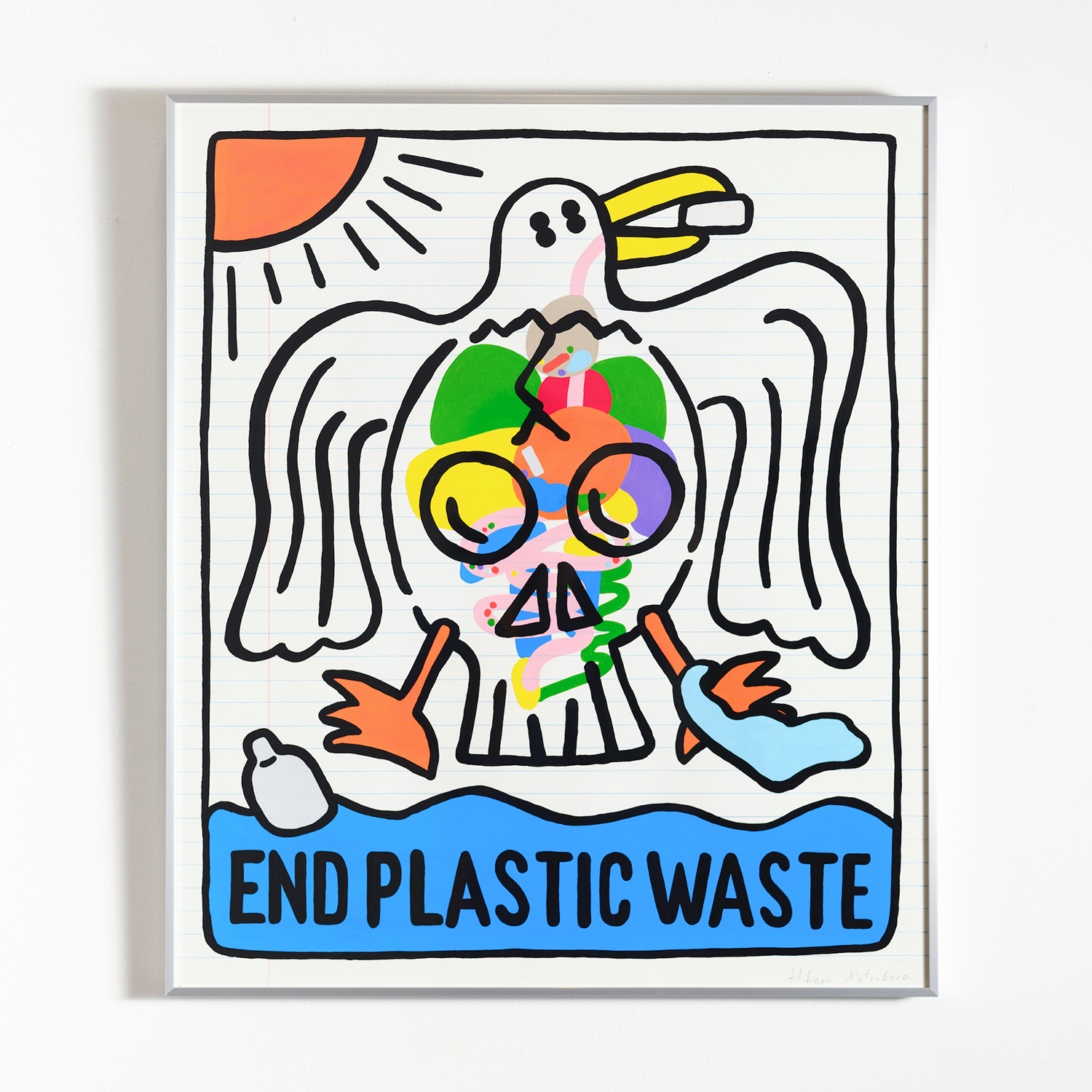 A graphical and catchy bird motif. Japanese graphic artist, Hikaru Matsubara, consistently uses simple lines to draw pop motifs, but there are several layers in his artworks. In the past few years, he has been layering lines with different textures on a certain graphic to give a different meaning to the underlying picture.

Appreciating this artwork again with that in mind, you can see several layers to this catchy bird motif. The belly of the bird has a colorful hue that does not seem to be its internal organs, and there are other colorful and small materials inside the organs. And if you step back and look at its belly, you can find that it will be transformed into a skull. This is the essence of Hikaru Matsubara’s artworks by drawing multiple layers. The layers sometimes have contrasting elements and meanings, which gives a deep impression of the message of the work. What is the meaning of the phrase “END PLASTIC WASTE” on it?

In this artwork, you can find the plastic bag that are caught on the foot of the seabird and the plastic bottle floating in the ocean. We are all more or less aware of the problem of plastic waste discharged into the ocean by the introduction of the plastic bag fee in July 2020 in Japan or new policy of serving coffee with paper straw at Starbucks. 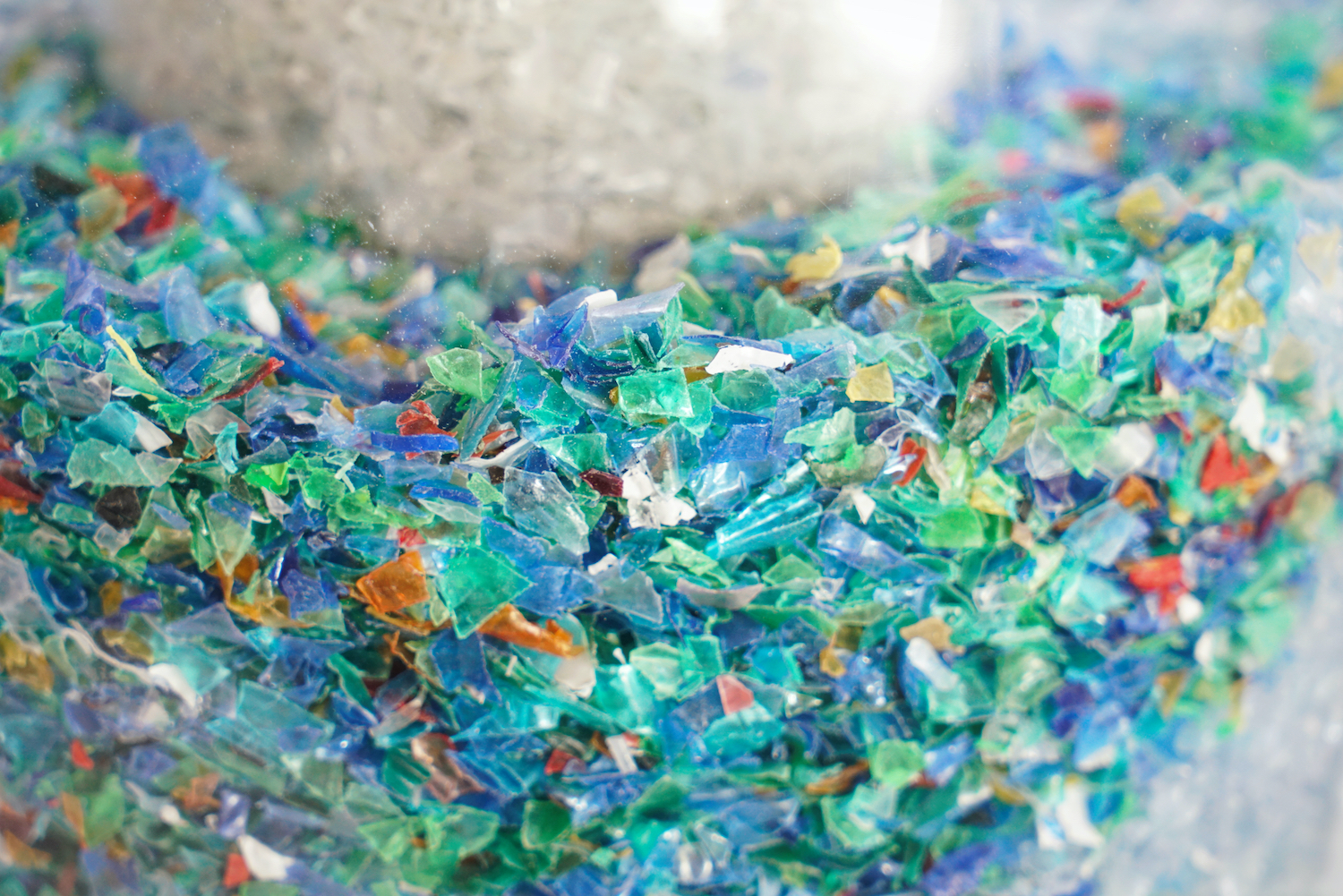 Plastic is a man-made compound that remains undecomposed when it is released into nature. Deteriorated plastic is broken into small pieces by waves and sunlight, and pieces of less than 5 mm in diameter are called “microplastics”. Back to the artwork by Hikaru Matsubara at the beginning. Seabirds do not have the ability to distinguish plastic, a substance that does not exist in nature, and 90% of them eat it, mistaking for food (*1).  The ingested plastic cannot be digested but accumulates in their stomachs. Eventually they can no longer take food and die.

Not only seabirds but more than 700 marine species including fish, sea turtles, seals and other marine mammals, have been injured or killed by ingesting plastic or getting tangled in fishing nets. Human who eats fish that has ingested plastic also ingests 100,000 small pieces of plastic every year. In terms of weight, it is estimated to be 5 grams (the equivalent of a credit card) per week, 21 grams per month, and 250 grams per year (*3). 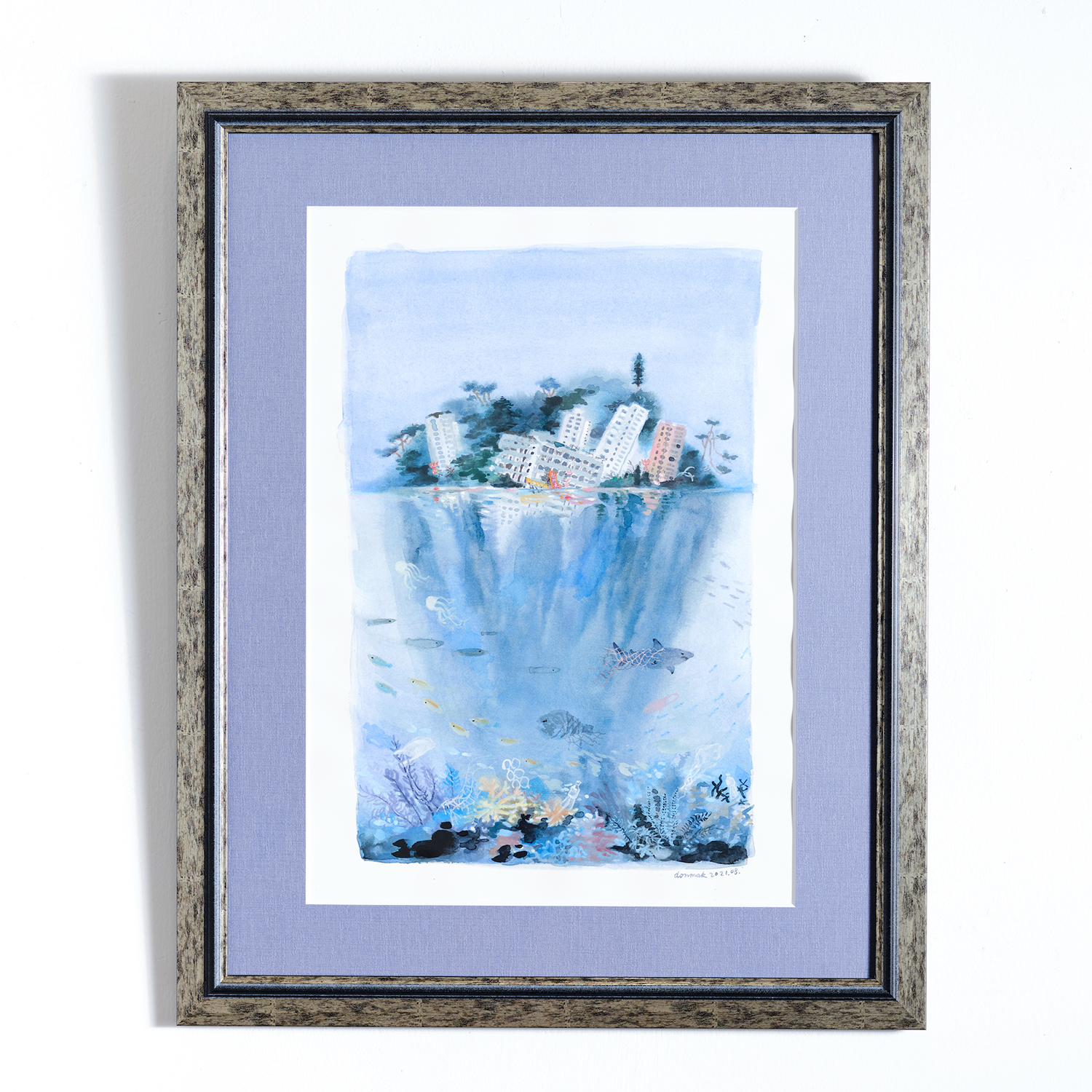 Don Mak, a native of Hong Kong who now lives in the UK, draws Hong Kong Island as it is about to sink in this artwork called “Coral Sea”. Don Mak usually draws a happy, glittering Hong Kong city with his soft-touched watercolor. In this work, however, the colors are more melancholy in contrast. The painting shows plastic bags and bottles entangled in the coral and shark getting tangled in fishing nets. The ironic message of this work is that if the sea level rises due to the climate crisis and Hong Kong Island eventually sinks and there are no more humans left, the corals that have died will one day revive and the ocean that has been invaded by garbage will eventually be purified.

The annual production of plastics has increased 20 times in the past 50 years. However, only 9% of the total production has been recycled so far (*1). As mentioned earlier, plastic does not return to nature, therefore, the expectation that the ocean would eventually be purified as the painting by Don Mak suggests, will never be a reality. Will we continue to increase the amount of plastic waste floating in the ocean?

Japan is the third largest producer of plastic in the world, and the second largest generator per capita of plastic waste from packaging and containers. While Japan generates such a large amount of plastic waste, only 22% of it is recycled in the form of material recycling (*4). Moreover, the majority of the waste is exported and pushed to developing countries in Asia which do not have appropriate recycling systems. Of the remainder, 57% is processed under the method of thermal recycling (*4) which uses the heat generated by burning the plastic, but this is not considered as recycling in overseas. Also, this process emits CO2 and could impact global warming.

■From re-cycle to re-think 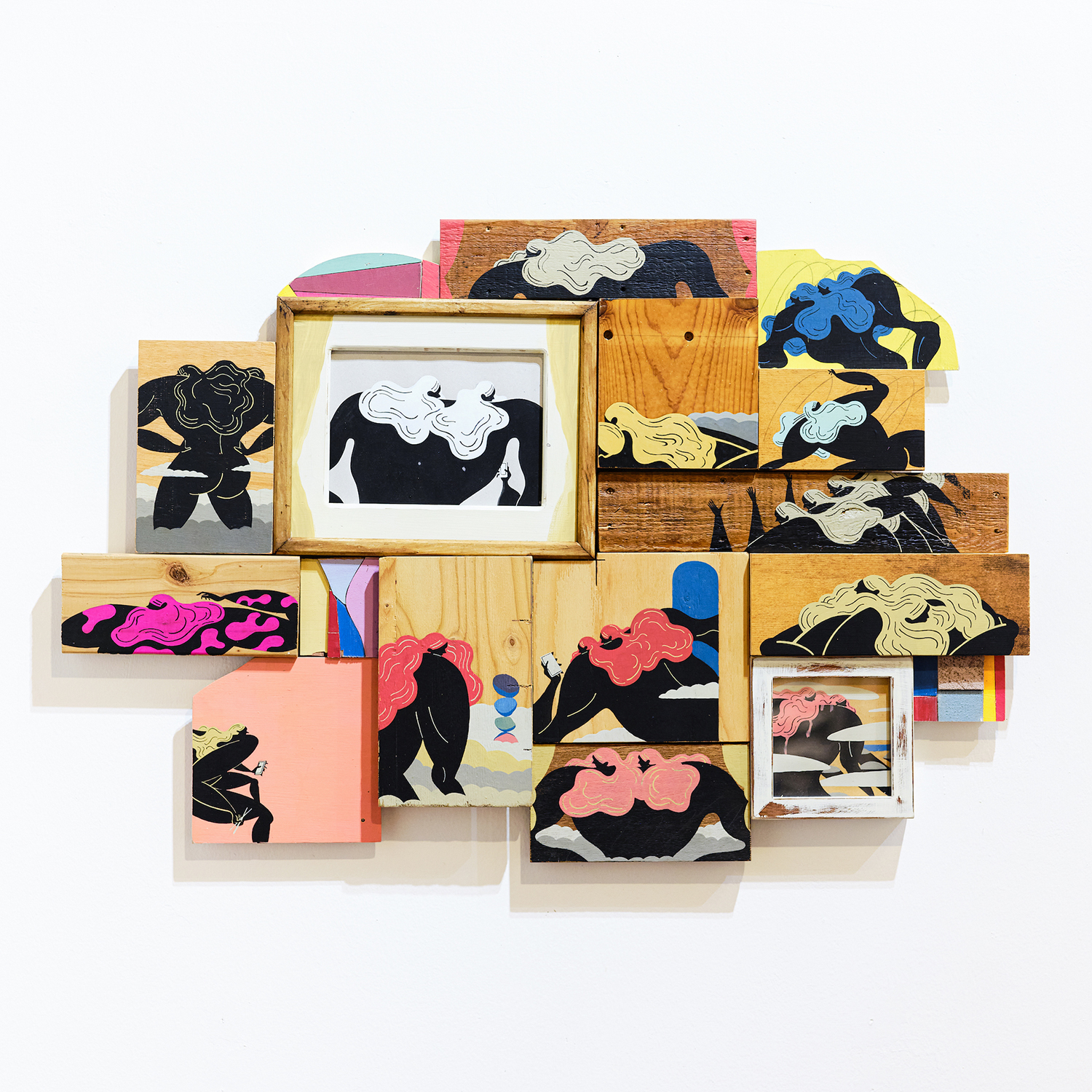 It is important for recycling to work, and it is also necessary to think about how to reduce the use of plastic as much as possible. However, when we replace plastic with paper, cloth, or anything else, it is still part of the resources from the earth. Perhaps the most important thing, rather than looking for better materials, is to rethink how we produce and consume things.

The artwork by Tomoyuki Washio, “Scrape of MONUMENT”, is made from scrap woods. The motifs drawn on them in various forms exude strength, dignity, and tenderness. Some of them look as if they are busy with something, some of them are standing strong, and some of them are using some modern equipment. They are like the incarnations of the oceans that human have affected until today. They still stand there strongly, sometimes gently, sometimes madly.

Original artwork is available on this shop.

Tomoyuki Washio, Hikaru Matsubara, Don Mak (Hong Kong), and Chou Yi (Taiwan) will participate in Exhibition #03 “Plastic Ocean” which is based on the concept of ocean pollution with plastic.